Television viewership for the FIFA World Cup on Sports18, which is part of the Viacom18 network, is steadily growing, based on data from the Broadcast Audience Research Council of India (BARC), sourced from the industry.

BARC data shows that cumulative reach of the first 58 matches, which includes the quarterfinals held last Friday, Saturday and Sunday, has touched nearly 47 million from 42 million for the first 48 matches, registering a growth of nearly 11 per cent.

“TV viewership growth has been steady for Sports18 during the FIFA World Cup. This is good for the Viacom18 network, which is looking to increase its base of viewers, given that Sports18 is a young channel, launched in April this year,” says Sajal Gupta, chief executive officer of Gurugram-based consultancy Kiaos Marketing.

The Reliance-backed Viacom18 has also been looking to increase its base of digital viewers as it prepares to stream the Indian Premier League from 2023-27 on its digital platform. This had prompted the broadcaster to live-stream the FIFA World Cup for free on its JioCinema app, a first for a broadcaster in India. 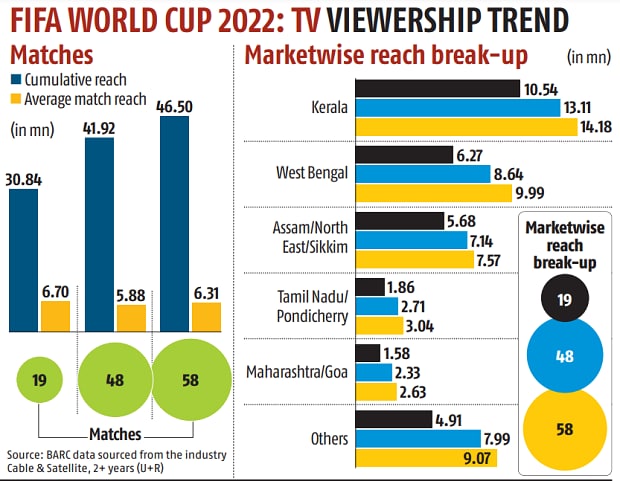 According to sources, the Jio Cinema app has crossed over 1.1 billion views during the FIFA World Cup. It is also the most-downloaded free app on Android and iOs phones.

In terms of paid subscribers, Disney+ Hotstar has a user base of 61.3 million in the July-September period, which is a 42 per cent jump over the year-ago period, according to its September quarter results released recently. Paid subscribers for the JioCinema app were not immediately available.

But the interesting part is that Disney+ Hotstar may stand to lose some of its paid subscribers, say experts, as Viacom18 begins streaming the IPL on its digital platform from next year. “Hotstar could lose at least 30-40 per cent of its paid subscribers as the IPL shifts to Viacom18,” says Karan Taurani, senior vice-president, research at Mumbai-based brokerage Elara Capital.

For Viacom18, the journey has just begun.