Apple is preparing to allow alternative app stores on its iPhones and iPads, part of a sweeping overhaul aimed at complying with strict European Union requirements coming in 2024. Software engineering and services employees are engaged in a major push to open up key elements of Apple’s platforms, according to sources.

As part of the changes, customers could ultimately download third-party software to their iPhones and iPads without using the company’s App Store, sidestepping Apple’s restrictions and the up-to-30 per cent commission it imposes on payments.

The moves — a reversal of long-held policies — are a response to EU laws aimed at leveling the playing field for third-party developers and improving the digital lives of consumers. For years, regulators and software makers have complained that Apple and Google, which run the two biggest mobile app stores, wield too much power as gatekeepers.

If similar laws are passed in additional countries, Apple’s project could lay the groundwork for other regions, according to the people, who asked not to be identified because the work is private. But the company’s changes are designed initially to just go into effect in Europe.

The news bolstered shares of firms that offer dating services and other apps. Match Group jumped 10 per cent and Bumble was up by 8.6 per cent — a sign investors think the companies could get a break from Apple’s commissions. Spotify Technology climbed 9.7 per cent. Apple’s shares, meanwhile, were little changed.

A spokesman for the Cupertino, California-based company declined to comment on the upcoming changes.

The main new European law, dubbed the Digital Markets Act, takes effect in the coming months, but companies aren’t required to comply with all of the rules until 2024. Officials in the US and other countries have pushed for similar laws. 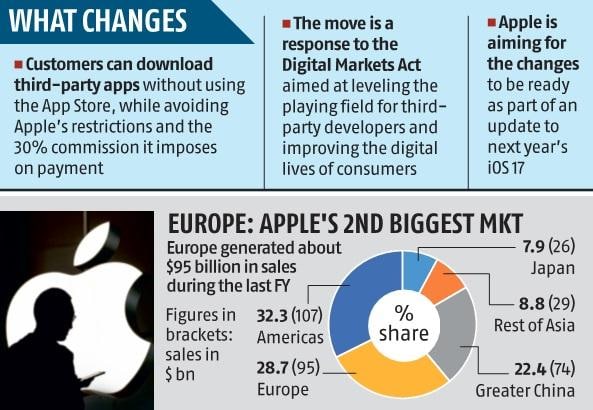 The act requires technology companies to allow the installation of third-party apps and let users more easily change default settings. The rules demand that messaging services work together and that outside developers get equal access to core features within apps and services.

The laws apply to technology firms with market valuations of at least $80 billion and a minimum of 45 million monthly users within the EU.

Apple is applying a significant amount of resources to the company wide endeavor. It hasn’t been a popular initiative within Apple, considering that the company has spent years decrying the need for ‘sideloading’ — the process of installing software without using the official App Store. In lobbying against the new European laws, Apple has argued that sideloading could put unsafe apps on consumers’ devices and undermine privacy.

Some engineers working on the plan also see it as distraction from typical day-to-day development of future features, according to the people. The company is aiming for the changes to be ready as part of an update to next year’s iOS 17, which would be in line with requirements.

To help protect against unsafe apps, Apple is discussing the idea of mandating certain security requirements even if

software is distributed outside its store. Such apps also may need to be verified by Apple — a process that could carry a fee. Within the App Store, Apple takes a 15 per cent to 30 per cent cut of revenue.

Apple hasn’t made a final decision on whether to comply with a component of the Digital Markets Act that allows developers to install third-party payment systems within their apps.

This would let users sign up for subscriptions to a travel app, for example, or buy in-app content from a game maker — without involving Apple.

As part of an agreement with the Japanese government, the company already allows some media and cloud apps to point users to the web to complete transactions. But the Digital Markets Act likely wants Apple and other technology giants to go further.

Apple also is working to open more of its private application programming interfaces, or APIs, to third-party apps. Those are the underlying frameworks that allow apps and features to interact with Apple’s hardware and core system functions.

Currently, third-party web browsers, including ones like Chrome from Alphabet Inc.’s Google, are required to use WebKit, Apple’s Safari browsing engine. Under the plan to meet the new law, Apple is considering removing that mandate.

Apple is also working to open up other features to third-party apps, including more camera technologies and its near-field communications chip — at least in a limited fashion. Currently, only the company’s Wallet app and Apple Pay service can use the NFC chip to enable mobile wallet functionality. Apple has faced pressure to let third-party financial apps have the same capability.

The company hasn’t, however, made a decision on how it may open iMessage and its Messages app to third-party services — another requirement of the Digital Markets Act. Engineers believe that such a change could hurt end-to-end encryption and other privacy features offered by iMessage. The company also isn’t currently considering integrating RCS, or rich communication services, a messaging protocol that Google and others are pushing Apple to adopt.

Apple is discussing further opening up its Find My network to accessories, like Tile, that compete with the AirTag. The Find My network allows AirTags to provide their location to its owner by using surrounding Apple devices as signals. While Apple has offered third parties that functionality since 2021, Tile and others have said the company gives its own accessory an advantage.

The EU, which includes France, Germany, Italy and Spain among a total of 27 countries, has threatened fines of as much as 20% of a company’s annual global revenue if they repeatedly violate the law. Apple generated nearly $400 billion in worldwide revenue in fiscal 2022, which would put such a fine in the $80 billion range.

Apple generated about $95 billion in revenue from Europe, which includes the EU and the UK, during fiscal 2022. That revenue base will likely take a hit when it makes the changes, which are poised to make the App Store less lucrative.

Overall, though, Apple should be able to absorb the financial impact. The App Store makes up 6% of total revenue, and Europe’s contribution to that is likely less than 2%, according to Bloomberg Intelligence analysts Anurag Rana and Andrew Girard.

It wouldn’t be the first time Apple had to make major changes to abide by local laws. The company is also planning to use a USB-C connector on the next iPhones in 2023 instead of Lightning, also to meet an EU regulation. In China, the company has made numerous compromises. That’s included using a local provider to host iCloud data and shifting AirDrop settings in a way that made it harder for protesters to share information.