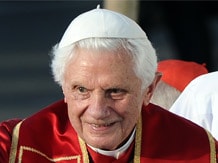 Benedict XVI, who shocked the world’s 1.2 billion followers of the Roman Catholic Church when he became the first pope to resign in almost six centuries, has died. He was 95.

Benedict XVI passed away on Saturday at 9:34 AM in his residence, the official Vatican News agency said on Twitter.

Benedict relinquished the leadership of the church in 2013, saying that he no longer had the “strength of mind and body” to fulfill his duties. He was succeeded by Argentine-born Pope Francis the following month and took the first-ever title of pope emeritus.

The end to Benedict’s almost eight-year papacy capped a tumultuous period for the church, which had come under attack for doing little to punish pedophile priests and covering up evidence of widespread child abuse.

As a German cardinal then known as Joseph Ratzinger, Benedict XVI was elected as pope in 2005 following the death of John Paul II. Succeeding such a charismatic, revered pope — John Paul II was swiftly put on the path to sainthood — wasn’t going to be easy even under normal circumstances. But crimes kept buried during his predecessor’s time would loom large during Benedict’s papacy.

There were allegations of sexual violence by Catholic clergy in Australia, Germany, Ireland, Italy, Germany, Poland the US and elsewhere. As the media uncovered court records of the church’s mishandling of sex crimes dating back half a century, Benedict faced questions over why he had failed to act on past warnings.

Under John Paul II, he had occupied one of the most important jobs in the church — defending Catholic doctrine and investigating crimes such as claims of sexual abuse. As a high-ranking cardinal and head of the Vatican’s Congregation for the Doctrine of the Faith, he had been in a position to probe the allegations.

Groups representing victims of abuse demanded his abdication. The scandal plunged the papacy into what Swiss theologian Hans Kueng called “its worst crisis since the Reformation.” Benedict apologized to victims of abuse and to their families but was criticized for not turning his words into action.

On Feb. 28, 2013, Benedict became the first pontiff to step down since Gregory XII in 1415. He moved from the Vatican to the papal summer residence south of Rome, later settling at a former convent within the Vatican walls.

Following his resignation, even some of his detractors recognized that Benedict had inherited a mass of problems that were difficult to manage — especially for a shy intellectual whose main contribution was his writing on church doctrine.

Benedict’s “books and encyclicals often went beyond the strictly dogmatic and contained novel and bold reflections on the moral, cultural and existential problems of our times,” Nobel laureate and self-proclaimed atheist Mario Vargas Llosa wrote in a column published in Spanish daily El Pais.

Biographer Peter Seewald argued that Benedict was a good man placed in difficult circumstances and that he had helped guard against fanaticism within the church by articulating a relationship between science and religion.

“He is not far off being the most widely read theological teacher worldwide, with editions of his books published in the millions,” Seewald said in a 2017 interview with the Catholic World Report.

He added, “In my opinion, Joseph Ratzinger is one of the most misunderstood personalities of our time.”

But criticism of Benedict continued through his last years.

A Vatican-commissioned report released at the start of 2022 found that he failed to respond adequately to four confirmed abuse cases reported within the Munich archdiocese when he was its leader from 1977 to 1982.

In one of those cases, the report found, the future pope knowingly opened his archdiocese to a priest who had been convicted of sexual abuse in a criminal court. “Archbishop Cardinal Ratzinger, through his behavior in this case, unilaterally gave priority to the interests of the church and priests over the interests of the injured party,” said the report compiled by German law firm Westpfahl Spilker Wastl.

In response to the report, Benedict denied any personal misconduct but said he was pained by “the abuses and the errors that occurred” while he was a leader within the church.

Joseph Ratzinger was born on April 16, 1927, in Marktl am Inn, near Germany’s border with Austria. The future pope dreamed of a life in the priesthood since the age of 5 when the archbishop of Munich, Cardinal Michael von Faulhaber, visited his kindergarten class. Faulhaber himself ordained Ratzinger as a priest in 1951.

Under the Nazis, the future pope joined the Hitler Youth, which was obligatory at the time, though he was a silent dissenter and skipped all meetings, according to biographer John Allen Jr. He was drafted into the German army and later deserted at 16.

His early brush with Nazism would dog his papacy. The UK tabloid the Sun was the first to resurrect his past and ran a story with the headline “From Hitler Youth … to Papa Ratzi” when he succeeded John Paul II.

As a young priest, he espoused a progressive theology until the student revolutions of 1968 instilled a distrust of the political left and a shift to a more orthodox stance.

He studied philosophy and theology in Munich and Freising and taught at several universities, then became archbishop of Munich in March 1977 and cardinal three months later.

Benedict was the first German pontiff since Victor II in the 11th century and the oldest cardinal elected since Clement XII, who was also 78 when chosen in 1730.

Benedict spent years penning by hand his philosophical take on the life of Jesus Christ in a three-volume work. He was an enemy of “moral relativism” and considered it his main job to resist the changes sweeping modern society.

“We are moving toward a dictatorship of relativism which does not recognize anything as for certain and which has as its highest goals one’s own ego and one’s own desires,” he said a day before the conclave of cardinals met to elect him pope.

Unsurprisingly, Benedict maintained the church’s orthodoxy on homosexuality, marriage for priests and an expanded role for women in the church. He also tried to continue his predecessor’s efforts to reach out to other religions, often with mixed results that tested relations with Jews and Muslims alike.

His comments on the Prophet Mohammed in a 2006 lecture sparked condemnation in Muslim countries, forcing Benedict to make several apologies. In 2009, he outraged the Jewish community when he failed to chastise a Holocaust-denying UK bishop.

Until the end of his tenure, Benedict argued it would be a mistake to compromise on ideology to make the faith more accessible to modern societies. Yet he did review the church’s stance on contraception and sexually transmitted diseases, adopting a more practical attitude. In 2010, Benedict said condom use could be justified in “single cases,” for example by sex workers, as a necessary “humanization of sexuality.”

Betrayed by his own butler, Benedict was forced to deal with the 2012 revelation of suspected dishonesty and political in-fighting in what became known as the Vatileaks scandal. The massive dump of stolen correspondence portrayed the Vatican as corrupt and Benedict as a frail leader undermined by his all-powerful second-in-command, Cardinal Tarcisio Bertone.

It took months for the pontiff to respond, and then only to remark that the “gratuitous” coverage of the events by the media had “brought sadness to my heart.” Benedict pardoned his valet, who confessed to leaking the memos to a journalist.