Privatisation of public-sector units (PSUs) may get a boost with the government reserving the right to exempt them from the minimum public shareholding norm even after a change in ownership.

The move comes as the government prepares to sell its stake in IDBI Bank.

Following the new rule, the new owner of IDBI Bank will be exempt from the minimum 25 per cent public float requirement even after stake sale by Life Insurance Corporation (LIC) and the government.

The finance ministry has inserted a clause into the public listing norms to exempt public floats for listed PSUs for a “specified period” as required under the Securities Contracts (Regulation) Rules, 1957. “The central government may, in public interest, exempt any listed entity in which the Central Government or State Government or public sector company, either individually or in any combination with other, hold directly or indirectly, majority of the shares or voting rights or control of such listed entity, from any or all of the provisions of this rule,” the fresh rule says.

The new amendment, which came into effect on January 2, will apply to these entities regardless of the government’s direct or indirect holding.

“For the purposes of this rule, the exemption shall continue to be valid for the period specified therein, irrespective of any change in control of such listed entity subsequent to issuance of such exemption,” according to a gazette notification issued by the Department of Economic Affairs in the finance ministry.

A senior government official told Business Standard: “It is an enabling provision that would facilitate strategic disinvestments proposed by the government or are in the pipeline.”

The rule, according to the official, will bring clarity to public floats and encourage investors to buy stakes in government-owned firms.

In the case of IDBI Bank, LIC and the government hold 49.24 per cent and 45.48 per cent, respectively. The public shareholding is 5.28 per cent.

The government may provide a certain time period to the new owner to comply with the norms, according to officials. 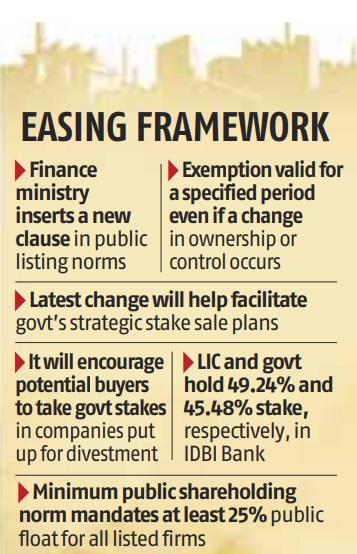 Last month, the government extended the deadline to submit preliminary bids for the lender till January 7. The successful bidder will have to make an open offer for acquiring 5.28 per cent from public shareholders.

Notably, the government has sought the nod of the Securities and Exchange of Board of India (Sebi) to reclassify the residual stake in IDBI Bank as “public” shareholding after the stake sale occurs.

This is because the Centre is relinquishing management control and is acting as an ordinary shareholder as to comply with corporate governance norms.

The government and Sebi both are working together to facilitate the strategic sale and remove regulatory ambiguity so that it should not act as hindrance in the process,” another official said.

The mandatory minimum public shareholding was raised to 25 per cent from 10 per cent in FY10 with a carve-out provided for PSUs from the norm, which was amended in 2014 to bring them on a par with private listed entities.

Listed PSUs were initially given until 2017 to comply with the norms, a deadline which was later repeatedly extended till 2021. There is no fresh deadline for complying with the norms for PSUs.