The Reserve Bank of India’s (RBI’s) foreign exchange reserves rose by $2.9 billion to $564.07 billion in the week ended December 9. This is the fifth consecutive week of an increase in the central bank’s coffers.

The rise in the previous week was mainly on account of an increase in the RBI’s foreign currency assets, which rose by $3.1 billion to $500.13 billion, according to latest data. In the week ended December 9, the RBI’s gold reserves declined by $296 million to $40.73 billion, the data showed.

Over the past five weeks, the RBI’s reserves have increased significantly amid a steep decline in the US dollar index. 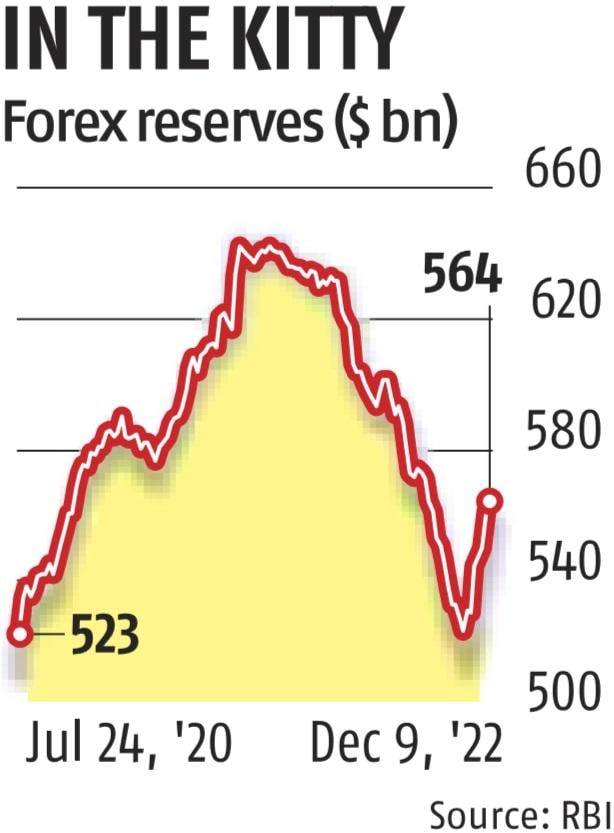 According to analysts, the increase in the RBI’s reserves is due to revaluation as well as the central bank’s purchases of the greenback as it looks to replenish its reserves.

The RBI’s reserves have declined sharply in 2022 — partially due to dollar sales by the central bank — in order to prevent excessive volatility in the rupee’s exchange rate. The rupee has witnessed bouts of volatility this year due to Russia’s invasion of Ukraine and the subsequent aggressive rate hikes carried out by the US Federal Reserve.

As on February 25, which was around the time of the invasion, the RBI’s reserves were at $631.35 billion. This sparked a global flight of investment to the safety of the US dollar.

Reserves worth $530 billion, as on November 4, covered 8.6 months of imports projected for the current fiscal year, the RBI said last month.