India’s flagship payment platform, the Unified Payments Interface (UPI), ended the 2022 calendar year on a high note as the volume of transactions touched a record 7.82 billion in December, amounting to Rs 12.82 trillion, again a record high.

Data released by the National Payments Corporation of India (NPCI), the umbrella body for retail digital payments in the country, showed volume of transactions in December was up 7.12 per cent compared to November, while value of transactions was up 7.73 per cent during the same period.

Volume and value of UPI transactions have continued to be on an upward trajectory for the last two years, apart from minor blips witnessed in some months because of pandemic related restrictions, mirroring the recovery in the broader economy and the increased adoption by consumers of digital modes of payments for their daily transactions. 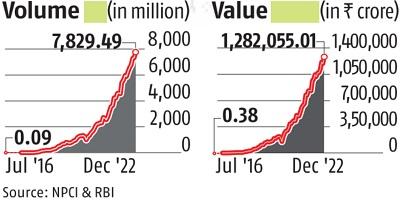 The adoption of UPI has increased manifold in the last two years so much so that the platform is now processing more peer-to-merchant (P2M) transactions than peer-to-peer (P2P) transactions, in volume terms. UPI was initially used mostly for P2P transactions but the trend has reversed significantly and now UPI is the most preferred payment mode for P2M transactions.

This augurs well for the platform especially at a time when the RuPay credit on UPI feature is finding takers among large credit issuers. HDFC Bank and three public sector issuers are already on board for this feature and other large issuers are expected to go live on this feature by March. Experts have reckoned that this will give a huge boost to UPI transactions once the concept takes off.

Going ahead, NPCI, which manages and operates UPI, is targeting a billion transactions a day and hopes to achieve it in the next 3-5 year’s time.