As of FY22, mortgage penetration stands at 13 per cent of GDP, with expectations that India would double home loans to $600 billion by 2027. In other Asian economies, mortgage to GDP ratios range between 20-30 per cent. Hence, India could see exponential growth.

By November, the banking sector had seen housing finance (HF) loans up 9.5 per cent (in terms of year-to-date). It’s estimated that NBFCs in housing finance had seen disbursements up by around 10 per cent. The largest opportunities are in the affordable home finance segment.

The average ticket size of loans is around Rs 15-16 lakh, which underlines this assessment. There’s focus on home ownership by millennials, owing to work from home ultimately leading to higher demand in tier II and tier III cities.

In the recent past, and the next few quarters, certain trends are visible. Momentum in disbursements continued in second sector (Q2) of FY23 with year-on-year (YoY) as well as month-on-month (MoM) and quarter-on-quarter (QoQ) uptick in disbursements. Growth was seen in affordable housing as well as high-end properties.

The interest rate regime has switched from flat with high liquidity and low real rates to rising, with tight liquidity and higher rates. This means higher cost of finance for housing finance companies (HFCs). Most HFCs prefer floating rate offers but then it’s a question of how fast HFCs adjust lending rates without impacting volume or causing distress to existing customers. LIC Housing Finance (LICHF) is also trying to shift fixed rate customers to floating rate, which has resulted in NIM (net interest margin) fluctuations.

Maintaining NIMs in this situation is a delicate balance. HFCs have raised rates in Q2FY23 and in Q3FY23 as well. However, the quantum of rise is not the same as repo rate hikes.

Most HFCs across affordable and high-end segments have been able to moderate credit costs, which implies lower delinquencies. Stage-3 assets improved QoQ for HDFC, LICHF, Home First, Aptus and PNB Housing while it was broadly stable QoQ for Repco and Aavas.

The biggest valuation gains could come in Repco, Aavas and Home First. HDFC valuations are complicated by the ongoing merger while LICHF valuations will take a while to settle given the shift in portfolio composition. 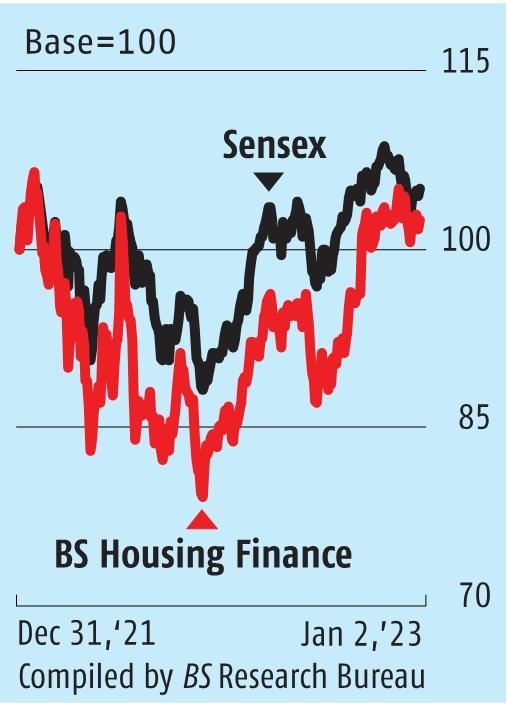