Salesforce Inc. said it would cut about 10% of its workforce and reduce its real estate holdings after the enterprise software company hired too many people during the pandemic-fueled boom and is now adjusting to more cautious spending by its customers.

The company, which has about 80,000 employees, said in a regulatory filing on Wednesday that it aims to complete the workforce restructuring by the end of fiscal 2024. The reductions will cost Salesforce $1.4 billion to $2.1 billion, the company said. As much as $1 billion of that will come in its fiscal fourth quarter.

Many tech companies are suffering in the wake of the Covid-19 growth spurt, which saw a surge in demand for electronics and cloud applications like collaboration software as work and schooling shifted to homes. But the pace of that growth has proven impossible to maintain. Across the industry, sales of smartphones and PCs are slowing worldwide. Salesforce and peers like Zoom Video Communications Inc. and ServiceNow Inc. have seen customers heavily scrutinizing software spending as the economy retrenches.

“The environment remains challenging and our customers are taking a more measured approach to their purchasing decisions,” Chief Executive Officer Marc Benioff said in a letter to employees on Wednesday. “As our revenue accelerated through the pandemic, we hired too many people leading into this economic downturn we’re now facing, and I take responsibility for that.” 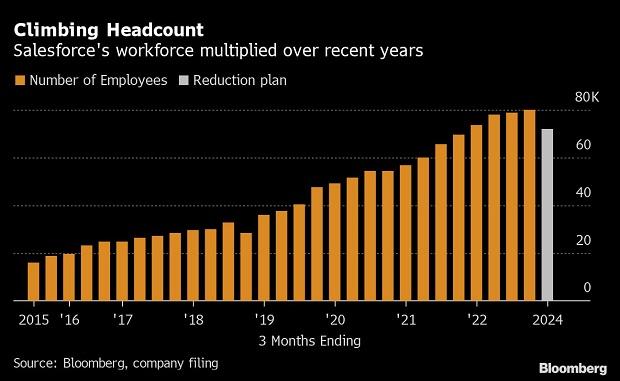 Salesforce, the largest private-sector employer in its hometown of San Francisco, has almost tripled its workforce in the past four years, in large part through dozens of acquisitions, including buying Slack in 2021 for $27.7 billion. From January 2020 to the end of October, headcount grew by more than 30,000.

Benioff said in the letter that many of the affected employees would be notified within the “next hour” and will receive a minimum of about five months of pay, health insurance, career resources, and other benefits. Those outside the US will receive a similar support aligned with local employment laws, the letter said.

Salesforce’s pullback likely reflects an industrywide slowdown in enterprise IT spending, rather than the company losing market share to rivals, wrote Bloomberg Intelligence analyst Anurag Rana. “Salesforce benefited from increased demand during the pandemic and hired aggressively as a result. These cuts could help management meet its adjusted operating margin goals” of about 175 basis points of improvement annually for at least the next three years, Rana wrote.

The software giant is under pressure from investors including activist Starboard Value to improve profit margins. Meanwhile, it has projected the slowest revenue growth for the current quarter since going public in 2004 and has seen top executives Co-CEO Bret Taylor and Slack Chief Executive Officer Stewart Butterfield announce their departures. 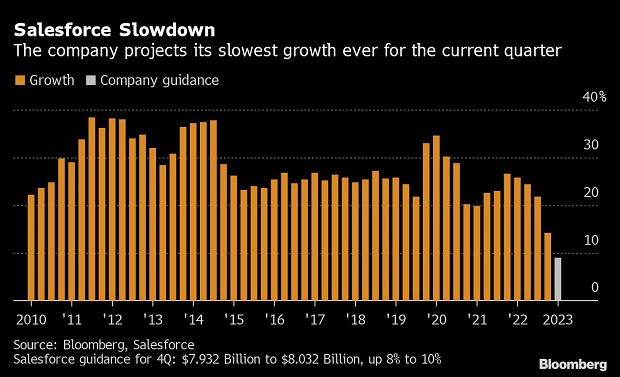 Shares rose about 4.6% in premarket trading in New York. The stock had declined about 47% in the 12 months through Tuesday.